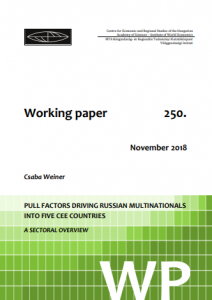 Investigating the Russian economic footprint through outward foreign direct investment (OFDI) and the activities of Russian multinationals has not become either outdated or less interesting, even though, understandably, most of the current attention on Russian influence in Europe has been focused on direct interference in political affairs. This paper is the second of a four-part series that outlines the international expansion of Russian multinationals in five EU-member Central and East European (CEE) states, i.e., the Czech Republic, Hungary, Poland, Slovakia and Slovenia. Here, the focus is on the pull factors responsible for Russian FDI inflows into these countries, as well as on the sectors in which investments are made. In doing so, the research relies on company data analysed using Dunning’s eclectic paradigm of international production and his typology of four motives behind FDI. We find that most Russian FDI has been done in hydrocarbons, iron, steel and machinery, but banking, software solutions, electronic production, real estate and even the light industry have also been targeted. Investment is dominated by market-seeking and, to a lesser extent, efficiency-seeking projects carried out by stateowned or state-related private firms. There are a limited number of innovative private Russian companies on the market that show features similar to those of multinationals from developed countries.