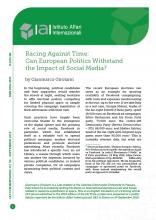 In the beginning, political candidates and their supporters would wander the streets at night, seeking locations to affix electoral posters, competing for limited physical space or simply covering the campaign manifestos of their adversaries with their own. Such practices have largely been overcome thanks to the emergence of the digital sphere and the growing role of social media, Facebook in particular, which has established itself as a valuable tool to spread political messages, analyse electoral preferences and promote electoral advertising. More recently, Facebook has introduced a specific tool, an Ad Library, a means through which users can analyse the expenses incurred by various political candidates, or indeed private companies, for ad campaigns sponsoring their political content and views.