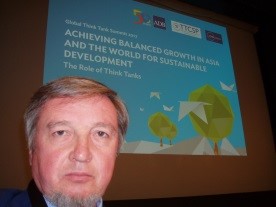 On 1-3 May 2017, the Global Think Tank Summit was held in Yokohama (Japan) organised by the by Asian Development Bank Institute (ADBI), Asian Development Bank Institute (ADB) and the Think Tanks and Civil Societies Program (TTCSP) of the University of Pennsylvania. The event was attended by more than 140 leading experts from more than 90 top world think tanks from over 40 countries. Ukraine was represented by Vasyl Yurchyshyn Director for Economic Programmes of the Razumkov Centre. Participants discussed a wide range of issues, including: challenges posed by globalisation, comprehensive economic growth, poverty and inequality, the role of think tanks and civil society in the era of populism. Vasyl Yurchyshyn took part in discussions on the issues and tasks of think tanks in developing a modern perspective, economic growth and development, as well as on the importance of strengthening cooperation between think tanks, since only joint projects will facilitate formation and implementation of sustainable development policies.