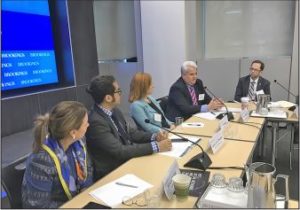 On 2-3 November 2017, Deputy Director General – Director of Political and Legal Programmes of the Razumkov Centre Yurii Yakymenko took part in the global think tank forum “Policy Studies vs. Alternative Fact Studies: Will Think Tanks Fall Victim to the “Guerrilla War” of Ideas?”, which took place in Washington D.C.
The forum was organised by the Think Tanks and Civil Societies Program of the University of Pennsylvania and the Getúlio Vargas Foundation (Brazil), with support of the Brookings Institution and the Woodrow Wilson International Center for Scholars (USA). The event was attended by approximately 50 leading think tanks from 25 countries.
The focus of discussion was on the increasing influence of such things as “alternative facts, fake news, misleading information campaigns, post-truth politics” on the public policy and social discourse in domestic and foreign policy. Yurii Yakymenko was a panellist in discussion “The Impact of “Subversive Technologies” on Politics and Political Process”, where among other panellists were experts with previous experience of work in government institutions of their respective countries – Jennifer Psaki (Carnegie Endowment for International Peace, USA), Winfield Boerckel (RAND, USA), José Luis Chicoma (Mexico), Natalia Salazar (Columbia). The discussion centred on assessing the practical impact of fake news and misleading information campaigns on specific countries’ domestic and foreign policy and the stability of their government institutions.
While in Washington D.C., Yurii Yakymenko met with Ambassador Extraordinary and Plenipotentiary of Ukraine to the USA Valerii Chaly.