The European project stands at a cross-road. The Brexit referendum, migration crisis, the persisting institutional flaws of the euro zone, the turbulences in Ukraine and increasing euroscepticism are only some of the challenges to the European Union. An ambitious Youth Conference aims to provide the necessary impetus for reinventing Europe.

SHAPING THE FUTURE: A YOUTH CONFERENCE ON EUROPE 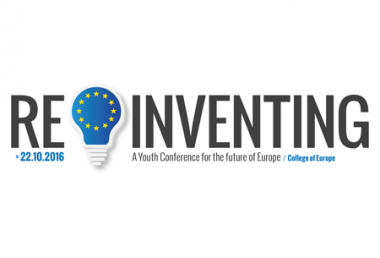 The Re-Inventing Europe Youth Conference aims to bring together politicians, academics and young leaders. After the initiation of the debate about Europe’s future at the Harvard University’s ‘European Conference’ in March 2013, some former students of the College of Europe decided to drive forward these discussions by organizing an ambitious high-level conference on an annual basis. In the fourth year of its existence the Re-Inventing Europe Youth Conference in Bruges has become one of the most renowned youth events in Europe.

This year’s conference will take place on 22 October 2016. Various high-level stakeholders will take the opportunity to discuss sustainable solutions to the challenges ahead of the European Union. This project, initiated in 2013, builds on an extensive network of universities, think tanks, foundations, and sponsors. Among our prestigious partners have been the Bertelsmann Stiftung, EuropaNova, Freshfields, Yale University, Paris-Sorbonne (Paris IV), VoteWatch, Think Young and the Young European Federalists.

This year’s Re-Inventing Europe Youth Conference seeks to engage the audience by covering the most pressing issues of Europeans and of the Europeans in 2016. It will consist of three keynote addresses and four panel discussions. Past distinguished speakers of this conference project and its partners include Herman VAN ROMPUY, Xavier BETTEL, Miro CERAR, Didier REYNDERS, Yves LETERME, Pierre MOSCOVICI, Oliver BÄTE (Allianz), Erika MANN (Facebook), Daniel GROS (CEPS), and many more. You can find the full programme here.

A debate on the future of the continent requires the input from the young generation. Being aware of the College of Europe’s reputation as graduate institute educating Europe’s future leaders, we call our project a Youth Conference and invite the young generation to voice its visions about the future of Europe. All of our panels incorporate representatives of the young generation. We reach out to the interested public with a livestream that can be followed worldwide and an extensive coverage of the conference in the social media. Since the conference is as inclusive as possible, entry is free for everyone. We look forward to welcoming you in Bruges on 22 October 2016!

If you would like to get more information about the Re-Inventing Europe 2116 edition you can visit http://www.reinventing-europe.eu or send an email to clemens.domnick@gmail.com.