Paola Bruni, The Regulation of Executive Pay in the Public and Semi-Public Sector across the European Union, March 2017

The regulation of top income, especially, the remuneration of senior civil servants, public officials and top-level executives in the semi-public sector has resurfaced as a topic of political and public debates across the European Union since the economic crisis in 2008. In order to control the remuneration of high-level public officials and make them more transparent, different measures have been introduced. This study – articulated in two different parts – aims at investigating, from a theoretical and practical point of view, the regulation of executive pay across the European Union. The underlying overall objective is to develop comparative insights, define possible best practices and focus on themes and systems’ elements that should become subject to further research in order to account for an effective policy model.

This study has been conducted upon the request of the Dutch Ministry of the Interior and Kingdom Relations by the European Institute of Public Administration of Maastricht. 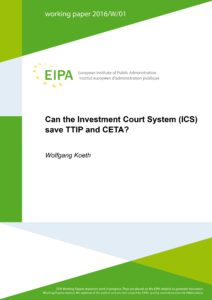 Wolfgang Koeth, Can the Investment Court System (ICS) save TTIP and CETA?, September 2016