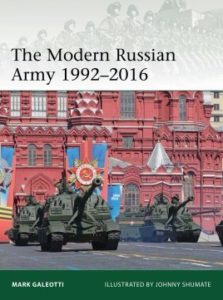 Since the collapse of the Soviet Union, Russia’s army has undergone a turbulent transformation, from the scattered left-overs of the old Soviet military, through a period of shocking decay and demoralization, to the disciplined force and sophisticated ‘hybrid war’ doctrine that enabled Vladimir Putin to seize Crimea virtually overnight in 2014. Using rare photographs and full colour images of the army in action and profiles of army leaders and defence ministers, as well as orders of battle and details of the army’s equipment and dress, the new publication by Mark Galeotti brings a vivid account of the army’s troubled history and of its current character, capabilities and status.

“The Czech-German Strategic Dialogue has been hailed as a significant upgrading of relations between the two countries. However, while it holds great potential, the dialogue mainly covers practical or tactical cooperation and is currently lacking in real strategic content. This deficit reflects a wider lack of strategic convergence between the partners and requires political, rather than bureaucratic action to address it. Doing so will require a larger shift in foreign policy thinking and action, particularly on the Czech side,” writes Benjamin Tallis in his newest policy paper.

“Under pressure from overlapping crises”, writes Michal Šimečka in his newest policy paper, “the European Union is embracing a more assertive role in security. The election of Donald Trump has added a further sense of urgency and purpose to EU defence cooperation. The pursuit of European strategic autonomy is not just a matter of upgrading capabilities, building institutions, or re-calibrating EU–NATO cooperation. It is also a struggle to re-invent the EU’s identity. The Czech Republic emerged as a supporter of the new dynamic, but Prague should do more to back its rhetorical support with tangible commitments and policy leadership.”

The Hague-based International Criminal Court, the world’s first temporary judicial forum, created in 1998 by the adoption of the Rome Statute, has been living through difficult times during the past months. After years of struggle since its operations started in 2002, the second half of 2016 has brought withdrawals, threats of withdrawals, and even a visible collective strategy for a mass withdrawal of African states from the system. What keeps states in such a structure, what makes them seriously consider a withdrawal, and what is the possible future of the International Criminal Court (ICC)?

Veronika Bilkova, Where Two Are Fighting, the Third Has to Adjudicate – Ukraine and the Russian Federation at the International Court of Justice, April 2017

The first hearing in the dispute between Ukraine and the Russian Federation was held at the International Court of Justice (ICJ) in the Hague on 6th-9th March 2017. The hearing did not relate to the substance of the dispute, but to the request by Ukraine for provisional measures under Article 41 of the ICJ. Despite this, it might be useful to briefly summarize the case and consider Ukraine´s chances to succeed in it.

On Thursday, 6 April 2017, the US carried out a missile strike in Syria. It did so in response to the chemical attack which had taken place two days earlier in the town of Khan Sheikhoun, in the rebel-controlled part of Idlib province, killing 80 and seriously injuring more than 200 civilians. The chemical attack has been uniformly condemned. The US attack, however, has attracted not only criticism, but also statements of support and of praise. This is surprising provided that the two attacks both constitute a clear violation of some of the most fundamental norms of the international legal order. And the latter attack may potentially threaten the stability of this order, and the values it protects, no less than the former one.