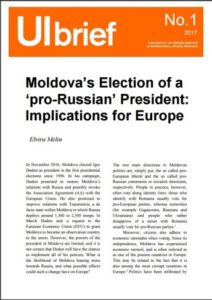 In November 2016, Moldova elected Igor Dodon as president in the first presidential elections since 1996. In his campaign, Dodon promised to restore Moldova’s relations with Russia and possibly revoke the Association Agreement (AA) with the European Union. He also promised to improve relations with Transnistria, a de facto state within Moldova in which Russia…