The book The Small State Facing Asymmetric Environment: A Reconsideration of the Identity? – The Slovenian Experience, which was co-authored by our Associate Research Fellow Rok Zupančič and published by the IIR publishing house, analyses asymmetry in warfare from the perspective of a small nation by combining a historical, a defence-strategic and also a wider security approach, including certain moral-legal and technological dimensions. Its primary objective is to prove that small countries, “often endowed” with rich historical experience, can also significantly contribute to discussions of asymmetric warfare and understandings of conflicts. It thus aims to fill a gap in the field, as similar studies in the field mostly focus on powerful states. The book mainly focuses on Slovenian asymmetric experiences, as Slovenia went through a series of dramatic alterations in the last 60 years. The Slovenes were forced to use an asymmetric approach during the Second World War, but today Slovenia is a part of both NATO and the EU alliance. And thus it is increasingly faced with situations where an asymmetric approach is used against it (especially in Afghanistan). The book also analyses how the still present and strong historical memories of asymmetric warfare cause almost schizophrenic political and social reactions and a huge identity crisis in Slovenia. The authors argue that in Slovenia the division within the nation, which has escalated in World War II and the years that followed, is still present nowadays, and the planned reconciliation of the nation has not happened yet. 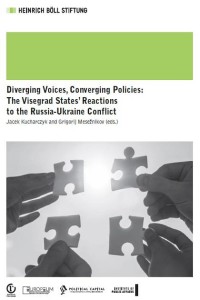 In order to explain the differing reactions of individual Visegrad countries to the Russia-Ukraine Conflict, the offices of the Heinrich-Böll-Stiftung in Prague and Warsaw asked their partner organizations to systematically analyze how these countries have dealt with the Russia-Ukraine conflict. The result is the report “Diverging Voices, Converging Policies: The Visegrad States’ Reactions to the Russia-Ukraine Conflict”. Particular consideration was to be given to the differing historical experiences, public opinions, economic relations, and energy and foreign policies of the Visegrad countries. Our Director Petr Kratochvíl co-authored (together with Věra Říháčková) one of the contributions to this report.

The energy issue has long been one of the most discussed and controversial topics in relations between the European Union and the Russian Federation. The intention of the present article is to provide an attempt to overcome the largely non-discursive way of looking at the energy interaction of the EU and the RF, a view which is also anchored in the security conditions, and to analyze EU energy relations with Russia in the years 2004 – 2014 through an integration discourse. On the theoretical level, the article is based on a critical constructivism, which in relation to the discourse as the main concept reflects a number of fundamental knowledge. At the methodological level, the article is based on discourse analysis as a basic methodological tool through which the author examines the EU text documents. 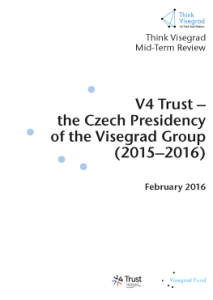 The V4 Presidency Mid-Term Review Report assesses the first half of the Czech V4 presidency and suggests key recommendations for the remaining time of the presidency. The assessment is based on the Presidency’s own priorities, but also on the overall context in which the Presidency is taking place. The report is based on individual opinions of its authors and also, partly, on existing analyses provided by Think Visegrad throughout the year 2015.