The PPC brought together academics and researchers from the broad TEPSA network, policy-makers, media and civil society in order to discuss the agenda and challenges of the upcoming Council Presidency. Prior to the event recommendations had been prepared by the following members of the TEPSA network: Iain Begg (LSE, London), Michele Chang (TEPSA Board, College of Europe, Bruges), Brendan Donnelly (Federal Trust, London), Andres Kasekamp (EVI, Tallinn), Lucia Mokrá (TEPSA Board, IESIR, Bratislava) and Mark Rhinard (UI, Stockholm). They do not necessarily represent the view 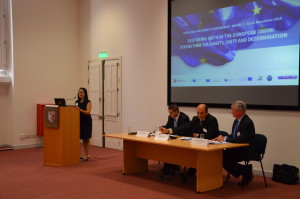 of TEPSA or its member institutes.

The full text of the recommendations can be read here below:

The Maltese Presidency comes at a time when the EU has to confront the reality of Brexit, yet also has unfinished business in many of the policy domains that have dominated the EU policy agenda in recent years. For example, even though migration flows into Europe have slowed slightly in recent months, this should not hide a series of blatant failures on the part of European Union member states. Similar difficulties continue to afflict the EU approach to ending the economic crisis, as well as its stance towards Russia. The informal European Council of the 27, held in September, in Bratislava was a first step towards defining a way forward, but also revealed deep divisions. The recommendations which follow are for specific initiatives the Maltese presidency might take to push the EU towards answering some of these challenges.

The Presidency will need to ensure that the ambitions set out in the Bratislava Declaration and Roadmap make tangible progress in the first semester of 2017. A key objective should be to implement the EU Global Strategy in the areas of security and defense, notably by strengthening FRONTEX competences and by accelerating progress on the proposed travel information and authorisation system (ETIAS).

While the economy section of the Bratislava Roadmap highlights initiatives on Capital Markets Union, Digital Union and Energy Union as vital to boost economic growth, the Maltese Presidency should not lose sight of the continued vulnerability of the European banking sector.

The Presidency should do its utmost to strength the banking union by developing the resources of the Single Resolution Mechanism and securing a workable compromise on common deposit insurance.

Delivering on our promises, as stated in the declaration, must be shown to mean more than top-down measures. The Presidency should work towards more effective communication between EU institutions, governments and citizens by experimenting with new forms of dialogue and emphasising open communication.

Mediterranean cooperation and the refugee challenge

The refugee challenge facing Europe has yet to subside, despite nominal decreases in flows and declining public attention of late. Having failed to anticipate the upsurge in migration following years of tumult in the ‘near abroad’, member states were caught out by inadequately boosting administrative capacities for border control and proper asylum procedures – despite years of cajoling and financial support from EU institutions. When those weaknesses were starkly exposed, another failure arose: member states refused to work together to control internal flows, share responsibility and keep internal borders open. None of those failures seems to have been rectified, causing continued problems as migration reverts from the Syria-Turkey-Greece route to the central Mediterranean route. Malta is ideally placed to improve cooperation on all three fronts:

 First, the Presidency can work with non-EU Mediterranean countries to improve conditions abroad; this includes general EU efforts to disrupt people smuggling and specific measures to improve economic development, water sustainability and food production, building on the proposals for the PRIMA Initiative.

 Second, the Presidency can encourage further developments to improve safe and legal asylum procedures into the EU, which, despite growing anti-immigrant attitudes across Europe, can help to boost European economies.

 Third, improved care and support for migrants in Europe, including protection of human rights, must be a priority for the EU under the Malta Presidency.

In the light of the difficult, but ultimately successful conclusion of the CETA deal, the Maltese Presidency should seize the opportunity to work with the new US administration either to give a fresh impetus to the TTIP negotiations or to salvage whatever is possible from these negotiations.

Despite regular tweaking of the European semester as an instrument of economic governance, it continues to have only a limited impact. The Maltese Presidency should initiate a high-level review of the semester process with a remit to rethink the approach to economic policy coordination and, if necessary, to ask the Commission and the Council to go back to the drawing-board.

Assuming Article 50 is, as Theresa May has promised, triggered by the UK no later than the end of March, the Maltese Presidency will play a vital role in setting the tone for the ensuing negotiations. The Presidency should stress to both sides the importance of preventing “lose-lose” outcomes. It should remind the British government that the Union and its member states attach importance to the establishment and maintenance of good relations between the United Kingdom and the Union, if and when the United Kingdom leaves the Union. It should also stress to the British government that the Union and its member states other than the United Kingdom attach at least equal importance to the maintenance of their existing beneficial economic and institutional relations between themselves.

The Maltese Presidency should work to extend the deadline for reviewing sanctions against Russia from six months to one year or more. A longer time frame would buttress European unity, which is prone to be eroded every six months by attempts to divide the EU, and demonstrate the EU’s stance that the rules-based international order is worth preserving. The issue of sanctions would also become less vulnerable to equivocation resulting from electioneering in member states. If Russia fulfils its Minsk commitments, sanctions can always be lifted earlier.

Click here to dowload the PDF version of TEPSA’s recommendations.