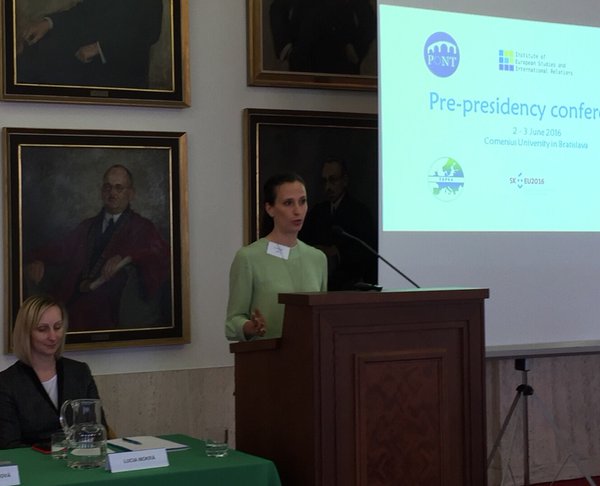 Funda Tekin presented the recommendations to the incoming Slovak Presidency at the occasion of the TEPSA-IESIR Pre-Presidency Conference on 2 and 3 June 2016 in Bratislava. The conference was organised by the Institute of European Studies and International Relations (IESIR), Faculty of Social and Economic Sciences, Comenius University in Bratislava in cooperation with the Trans European Policy Studies Association (TEPSA), and with the support of the Slovak Ministry of Foreign Affairs and the PONT project.

TEPSA has urged previous EU presidencies to devise truly collective solutions to the migration crisis. This should be done out of principle as well as common sense – even the most self-interested, rationalist analysis shows that strengthened management of the EU’s common border, distribution of resources to assist with an orderly asylum process at overwhelmed entry points, and greater shared responsibility for hosting refugees will help to end the crisis. Yet state-centric solutions are on the rise, as the Visegrad Four’s refusal to accept refugee relocation and Hungary’s highly restrictive asylum criteria serve to illustrate. To make matters worse, the European Commission seems content to accept these individualistic solutions. The Commission’s proposals on migration reform, from both April and May of this year, allow for harsh treatment of asylum seekers at the external border in exchange for reinstating Schengen (reopening internal borders). TEPSA urges the Slovakian Presidency of the EU to resist this ‘deal with the devil’ and encourage member states to see beyond their short-term impulses in exchange for long-term, collective solutions.

Slovakia takes over the EU Presidency at a time when EU-Turkey relations are strained, but more vital than ever, not least because of the refugee crisis. The EU has re-discovered Turkey as a “key strategic partner” and restarted accession negotiations and the visa liberalization procedure with Turkey as well as strengthened institutional EU-Turkey relations through biannual EU-Turkey Summits and regular meetings at the highest levels. At the same time there has been backsliding in Turkey’s reform process vis-à-vis the Copenhagen criteria, while the authoritarian drift in Turkey’s political system continues unabated, with power increasingly in the hands of President Erdoğan.

In the last decade, increasingly euro-sceptical populism – mainly, but not only, right-wing – has been evident in most member states of the European Union. Populist notions are particularly effective in political domains which are inherently complicated, driven by symbolic politics, and characterised by low levels of public information on many key facets of European integration.

TEPSA calls on the incoming Slovak presidency to recognise, and respond to, three major drivers of populist euro-scepticism:

We urge the Slovak Presidency to counter the growing negativity by shifting the discourse from one that portrays so many common policies as a zero-sum game played among the member states, to one that emphasises the positive-sum outcomes from well-conceived policies that benefit all member states.

Given its external border with Ukraine, Slovakia has a strong interest in fostering a coherent and effective EU policy towards Russia. Progress towards a resolution of the Ukraine crisis can be advanced by:

With regards to the reform processes in Russia and the Eastern Partnership countries, the Slovak Presidency should build on the momentum from the ‘Panama Papers’ to work towards EU insistence on greater financial transparency and accountability in these countries. Such an initiative would help to deter repetition of scenarios witnessed in the case of Moldova, where the seemingly pro-European elite was engaged in large-scale corruption, and would be effective as a type of sanctions against Russian officials violating norms of international security and human rights. In particular, increased attention must be paid to suspicious deals involving EU nationals and EaP and Russian partners, especially regarding laundered funds located in the EU. The reform process should aim to achieve the progressive substitution of post-Soviet business norms by Western business ethics. Concerning EU-Russia relations, Slovakia will have the difficult task of negotiating amongst the EU-member states and their differing stances concerning the future development of these relations. In the spirit of not seeking to ‘punish’ societies for the actions of their governments and promoting closer ties between European and Russian societies there should also be attention to positive incentives. These should include new strategies for engaging Russian civil society through such instruments as massively increased students’ and youth exchanges, academic cooperation and track II dialogues with easier Schengen entry procedures for Russian nationals. These exchange opportunities may be not only bilateral (EU-Russia) but also involve Eastern Partnership countries.

Although the recent improvement in Eurozone growth is encouraging, the recovery from the crisis remains fragile. It is, therefore, a disappointment that the efforts of successive presidencies to revive the Europe 2020 strategy have been ineffectual. An approach going beyond the worthy but limited ambitions of the European Fund for Strategic Investment – the Juncker Plan – is needed to demonstrate to increasingly sceptical publics that the EU can make a difference. The Slovak Presidency should seize the opportunity to give fresh momentum to the Europe 2020 strategy or a successor strategy, focusing relentlessly on jobs and growth. The EU needs a budget fit for the challenges of today rather than the previous century. After the high-level group on own resources, chaired by Mario Monti, presents its report, it will be incumbent on the Slovak Presidency to ensure that its findings are acted upon and not left on the shelf to gather dust. Specifically a clear timetable with binding deadlines should be set for implementing new own resources.

Click here to dowload the PDF version of TEPSA’s recommendations