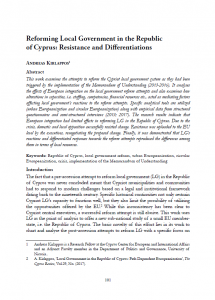 Andreas Kirlappos, Reforming Local Government in the Republic of Cyprus: Resistance and Differentiations, Vol 30 No 2 (2018): The Cyprus Review

This work examines the attempts to reform the Cypriot local government system as they had been triggered by the implementation of the Memorandum of Understanding (2013-2016). It analyses the effects of European integration on the local government reform attempts and also examines how alterations in capacities, i.e. staffing, competencies, financial resources etc., acted as mediating factors affecting local government’s reactions to the reform attempts. Specific analytical tools are utilized (urban Europeanization and circular Europeanization) along with empirical data from structured questionnaires and semi-structured interviews (2013; 2017). The research results indicate that European integration had limited effects in reforming LG in the Republic of Cyprus. Due to the crisis, domestic and local opposition successfully resisted change. Resistance was uploaded to the EU level by the executives, renegotiating the proposed change. Finally, it was demonstrated that LG’s reactions and differentiated responses towards the reform attempts reproduced the differences among them in terms of local resources.