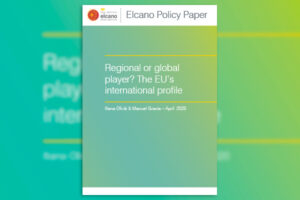 The upcoming ‘Geopolitical Commission’ has the task of re-thinking several aspects of the EU’s foreign policy and global role. This reflection will necessarily build on the current global strategy, published in 2016, which insists on the need for the EU to upscale its military capacities and to focus on its nearest and extended neighbourhood.

By means of the Elcano Global Presence Index, this policy paper aims to depict the EU’s international profile while tracking to what extent its features and the objectives of the EU’s global strategy are aligned with the volume, nature and geographical allocation of the Union’s external projection.

As stated in the EU’s global strategy, there is a significant gap between the EU’s presence and its international influence. In that same line, and unlike other major international players, its soft profile still needs to be balanced with stronger military capacities. However, despite what the strategic document claims, the EU external projection is strongly concentrated   in few facets and member states. This is also linked to its geographical allocation, with a decreasing importance of the near and extended neighbourhood (including candidate countries) with respect non-EU West Europe, Asia, North America and, to a lesser extent, Latin America. Moreover, the exact consequences of Brexit on the EU’s global presence remain unknown.