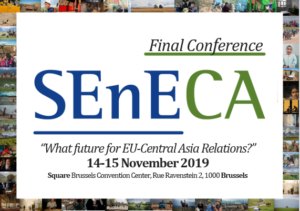 SEnECA – Strengthening and Energizing EU Central Asia Relations – consortium partners TEPSA and CIFE have the honor to invite you to the SEnECA Final Conference:

What Future for EU-Central Asia Relations?

During the two-day event, SEnECA consortium members will present the outputs of the project, and will discuss the recommendations to implement the new EU’s Central Asia strategy. The event will also feature a panel on culture as a catalyst for social change in Central Asia, and on connectivity between Asia and Europe. Furthermore, the last panel of the conference will be an outlook on EU-Central Asia relations for 2030.

The SEnECA Final Conference will also be a good opportunity to see some of the photos that were exhibited in the SEnECA Photo Exhibition in April 2019. Moreover, as part of the conference, a Kyrgyz film will be screened on the evening of 15 November. The film “The Song of the Tree”, which focuses on the life and the tragedy of a traditional village, will be screened at Kinograph at 17:00.

The programme of the event can be accessed here.

Further information can be found on the SEnECA website.