“It remains my full conviction that the future of civilisation – and indeed of our species – depends on humanity progressing towards supranational government” – Robert Toulemon, in “Souvenirs Européens”,  2005. 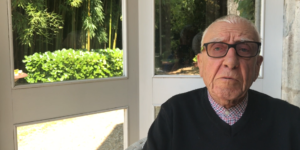 On 5 July 2020, TEPSA founding member from France and tireless champion of the European project, Robert Toulemon, passed away peacefully in Paris.

Robert Toulemon made a valuable contribution to the European project during his long career. After brushing shoulders with prominent European federalists such as Étienne Hirsch, André Jeanson, and Jacques Delors in his early career, Toulemon moved to Brussels in 1962 on the advice of the Élysée, to serve as Chief of Staff to the French Vice-President of the European Commission, Robert Marjolin.

After working tirelessly in the Commission during the remainder of the 1960s, Toulemon embarked on a three-year stint from 1970-1973 working alongside Altiero Spinelli. The prospect of working with Spinelli delighted Toulemon, who fondly remembered the Italian as a “troublemaker […] who arrived in Brussels crowned with the glory of having converted the Italian left to European federalism”.

The 1970s marked a return to the French national scene for Toulemon, serving variously as Chief of Staff to Pierre Abelin, Minister of Cooperation (1974-1976), Representative of André Fosset, Minister for Quality of Life (1976), and as Inspector General of Finances (1977).

Robert Toulemon, a lifelong European federalist and tireless advocate for the European project, later noted that “I discover a European civil society thirsting for peace, freedom, democracy and aware of the threats posed to the new Europe by the resurgence of ethno-nationalist confrontations”. It is in his spirit that we should all aim to move forward in support of a united Europe, as he put it, thirsting for peace, freedom, and democracy.

The TEPSA Board, Secretariat and Member Institutes would like to express their deepest condolences to Robert Toulemon’s family for their loss. We will remember Robert Toulemon as an inspiring and committed European, and we are grateful for his invaluable contribution to our Association.

In September 2018, we sat down with Robert Toulemon at his home, to gain insight into his experience and expertise. You can watch the interview here.