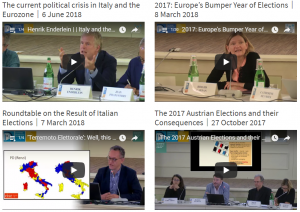 Today, the political scenario across Europe is indeed turbulent. The Great Recession had a profound impact on democratic politics in the member states and on the consequences of EU level action for domestic politics. In many member states, a pronounced legacy of the crisis is the volatility of domestic politics and the severe punishment of governing parties.

The mainstream parties are being squeezed and the vote share of challenger parties have increased. In a number of countries of East Central Europe there has been a pronounced shift to the right; the ‘European project’ has become much more politicised and contested. There is also a widening of the use of referendums in the member states:  all of these referendums were held within one country but by their nature had an impact on other member states and the EU as a whole.

This selection of multimedia materials provides a reflection on some of the national elections and referendums in Europe since 2017 and a high-quality analysis on the future of Europe by researchers at the Schuman Centre for Advanced Studies, European University Institute.