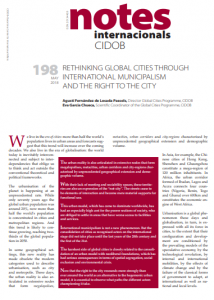 We live in the era of cities: more than half the world’s population lives in urban areas and forecasts suggest that this trend will increase over the coming decades. We also live in the era of globalisation: the world today is inevitably interconnected and subject to interdependencies that oblige us to think and act outside the conventional theoretical and political frameworks.

The urbanisation of the planet is happening at an unprecedented rate. While only seventy years ago the global urban population was around 20%, now more than half the world’s population is concentrated in cities and metropolitan regions. And this trend is likely to continue growing, reaching two-thirds of the global population in 2050.

In some geographical settings, this new reality has made obsolete the modern categories used to describe urbanisation, such as city and metropolis. These days, the urban reality is also articulated in extensive nodes that form megalopolises, metacities, urban corridors and city-regions characterised by unprecedented geographical extension and demographic volume.