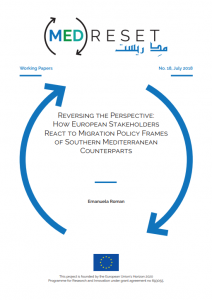 This paper investigates how European institutional and civil society actors frame and assess EU migration policies in the Mediterranean area. Based on extensive in-depth interviews, the report analyses how European actors describe the overall EU approach to cooperation with Mediterranean third countries in the field of migration; how they evaluate the most recent and relevant EU policies in this field; and which are the actors that they identify as key players in this policy area.

European civil society actors proved to share the critical views expressed by their civil society counterparts in Lebanon, Morocco, Tunisia and Turkey. They described the EU’s discourse as securitizing and Eurocentric, highlighting that it also translates into securitizing, Eurocentric and conditionality-based policies and practices. They lamented the lack of legal migration opportunities, but at the same time they praised the European Commission for its efforts in this field.

They also claimed the lack of gender-sensitive or gender-specific policies in the area of migration and the limited involvement of SEM CSOs in migration policymaking. The paper also explores possible alternative policy instruments, looking into the pros and cons of a more participatory governance of migration from the perspective of EU officials and civil society actors.