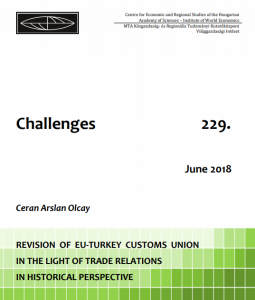 The acceleration of Globalization, with the decrease in the costs of information, communication and transportation, changed the nature of the world economy. There was a shift in the power of developed countries to developing countries which affected the routes of world trade. Multilateral trade agreements under the umbrella of World Trade Organization (WTO) started to loose strength and global trade actors started to incline towards regional trade agreements (RTA).

After the 2000’s, a new era started, also for the European Union. Not long after the single new currency was released and put in the circulation, EU was facing a financial crisis. The years of the 2010’s were challenging for EU and at the same time, it was working on healing itself both economically and politically.

The EU, as a global actor, in order to be responsive to the changes worldwide, started to transform its trade structure gradually. A need to adapt trade policy to new developments emerged. Hence, EU started to build flexible FTA models that suit best the conditions with partners.