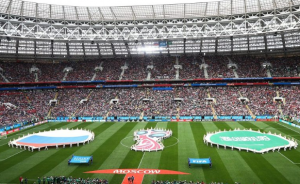 The FIFA World Cup in Russia, the sporting event with the largest TV audience, is helping to overcome the Putin regime’s international isolation, at least in the West. This is what the President was hoping for, with the second large-scale global event of this kind in Russia in the past few years, following the Winter Olympics hosted by Sochi in 2014.

The simple fact of organising the World Cup is a coup in its own right, and it has enhanced the image of both Russia and Putin. Putin has always seemed to focus more on the World Cup as an event than on his own national team, although the unexpectedly strong showing by the Russian team must have taken many by surprise, starting with the Kremlin itself.

The official poster was an early sign of the World Cup’s geopolitical baggage, as Max de Haldelang astutely points out. With its constructivist style, full of ‘great power’ Soviet resonances, the protagonist is the great goalkeeper Lev Yashin (1929-1990). But it is also an allusion to the space race, which for a time in the Cold War Moscow managed to lead. The foreign visitors –over half a million of them– expected in various Russian cities will get to know the country at first hand, but the event in itself is not a money-spinner, as this analysis by the World Economic Forum makes clear.