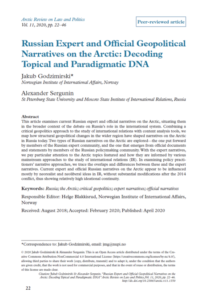 This article examines current Russian expert and official narratives on the Arctic, situating them in the broader context of the debate on Russia’s role in the international system. Combining a critical geopolitics approach to the study of international relations with content analysis tools, we map how structural geopolitical changes in the wider region have shaped narratives on the Arctic in Russia today. Two types of Russian narratives on the Arctic are explored—the one put forward by members of the Russian expert community, and the one that emerges from official documents and statements by members of the Russian policymaking community. With the expert narratives, we pay particular attention to the Arctic topics featured and how they are informed by various mainstream approaches to the study of international relations (IR). In examining policy practitioners’ narrative approaches, we trace the overlaps and differences between these and the expert narratives. Current expert and official Russian narratives on the Arctic appear to be influenced mostly by neorealist and neoliberal ideas in IR, without substantial modifications after the 2014 conflict, thus showing relatively high ideational continuity.