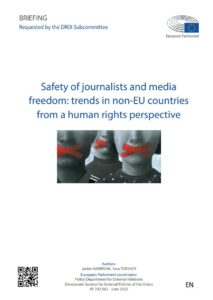 Since 2012 media freedom has been in general decline. While statistics for the 2002-2021 time-period show that the number of killings of journalists has declined somewhat in recent years (since 2013), there has been a marked erosion of legally enabling environments and an increase in other damaging forms of targeted attacks on the media. These include non-lethal physical violence; legal, digital, psycho-social, gender and identity-based intimidation; and state-led capture of the media landscape, often accompanied by politically-motivated denigration and exclusion of critical media voices. Our findings show: (i) political journalism remains most at risk; (ii) major social shocks or crisis (exemplified by the COVID-19 pandemic) have been widely used as pretexts for intrusive government measures to constrain media freedom; and (iii) media pluralism and independence are declining. Impunity remains unacceptably high with most cases of killings remaining unresolved. Imprisonments are on the rise while online spaces are becoming increasingly hostile and replete with gender-based hate speech. Countering the wide range of overt and covert threats will require an unequivocal reversal of global trends towards authoritarian controls and suppression of independent media. To undertake this, the European Parliament and concerned institutions need access to reliable data which reflects the realities of the multiple threats that impede the work of journalists globally.