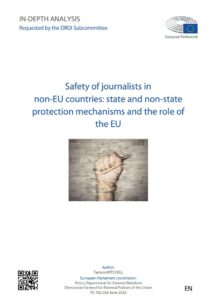 TEPSA has coordinated an in-depth analysis requested by DROI Subcommittee of the European Parliament. The briefing was authored by Tamsin Mitchell, an independent researcher and consultant from the United Kingdom. The briefing is entitled “Safety of journalists in non-EU countries: state and non-state protection mechanisms and the role of the EU”.

The following is a qualitative, comparative analysis of international state and non-state mechanisms and tools aimed at protecting and ensuring the safety of journalists, and the extent to which they are used and valued in three non-EU countries: the Philippines, El Salvador and Tunisia. Emphasis is placed on the role of the EU in using and strengthening its own and other international instruments. The findings are based on 15 expert interviews and a literature review carried out between mid-February and late April 2022. The study concludes that while EU Delegations and other international actors in these countries are active in promoting journalist safety and freedom of expression to varying degrees and their presence and support is valued by civil society organisations (CSOs), there is considerable room for improvement. Across the three countries, certain protection mechanisms and tools were frequently mentioned by both EU/UN and CSO representatives, while others were not mentioned/used or appeared under-used. A series of recommendations are made, including to: continue and increase support of the most used mechanisms/tools; build awareness/capacity around using the full range of instruments; address the disconnect between the EU’s preference for private action and CSOs’ desire for more public action; and commission a full external evaluation into the implementation of the EU Guidelines on Freedom of Expression.