All the new publications of the CEE team are available here. 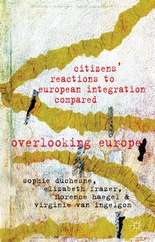 What do citizens say about Europe? Before the crisis of 2008 citizens in Britain, France and Francophone Belgium were ‘overlooking’ Europe by ignoring it in favour of globalisation, economic flows, and crises of political corruption. Innovative focus group methods allow analysis of the nature of their reactions and positions, and demonstrate how euroscepticism is a red herring. Instead they articulate indifference to and ambivalence about Europe contrasting with activists who engage in conflict about European issues. The analysis shows national and social differences. French projection contrasts with British exteriorisation and Belgian incorporation. The social gap is not a matter of deficits: workers have real arguments about issues close to home while managers show more concern about European politics.This book is part of the qualitative turn in European studies and both complements and challenges established knowledge on European attitudes.

Parliamentary scrutiny reserves have become a popular parliamentary instrument for the scrutiny of EU documents over the last two decades. While the exact provisions for them vary between the member states and according to their parliaments’ overall scrutiny system, parliamentary reserves generally mean that government representatives do not, or cannot, officially agree to a proposal in the Council (or COREPER or the working groups) while the parliamentary scrutiny process is ongoing. Yet despite the proliferation of reserve provisions, we actually know very little about them. The paper will therefore provide an overview over the specific features of scrutiny reserves in different member states. In addition, it investigates whether scrutiny reserves actually are an effective instrument to safeguard parliamentary influence in EU affairs by looking at how they are being dealt with at different levels of the Council negotiations.