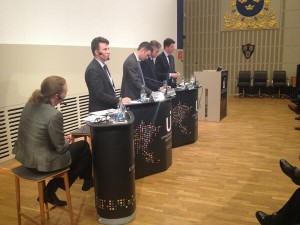 On the 4 December 2013, the Swedish Institute of International Affairs (UI) hosted a seminar on the future of the EU’s Common Security and Defence Policy (CSDP). The seminar was held in the lead-up to the EU Heads of State meeting on 19 December at which defence capabilities, and a stronger European defence industry, was on the agenda. Moderated by the Institute’s Director Anna Jardfelt, and with presentations by Camille Grand, Director at Fondation for strategic research, Paul Johnston, British Ambassador to Sweden, Jean-Pierre Lacroix, French Ambassador to Sweden, and Torbjörn Sohlström from the Swedish Ministry for Foreign Affairs, issues were discussed such as: What are the main challenges for the EU as a security actor? Is there a consensus between large member states like France and the United Kingdom on how the CSDP should develop? What is the Swedish perspective on EU crisis management?