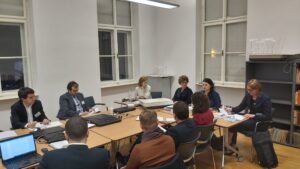 On 28 November 2019, SEnECA organised a panel on the topic “Challenges for the EU connectivity in its immediate neighbourhood and in Central Asia – energy security and sustainability” in the framework of the TEPSA Pre-Presidency Conference in Zagreb. Maja Bakran Marcich, Deputy general director of the European Commission´s Directorate General on Mobility and Transport (DG MOVE), Sinikukka Saari, Senior Associate Analyst at the EU Institute for Security Studies – EUISS, Paris and Alica Kizeková, Senior Researcher at the Institute of International Relations Prague, participated as speakers of this panel. The debate was moderated by Ana Maria Boromisa, Research Advisor at the Institute for Development and International Relations (IRMO).

The speakers discussed various approaches for the EU involvement in the connectivity and transport sector in Central Asia, and debated on the role of China and Russia in the region. Maja Bakran stated that many actions have been taken by the EU towards Asia in order to intensify the relations between the two regions, such as the EU-Asia Connectivity Strategy, published in 2018, the EU-ASEAN comprehensive air transport agreement (CATA) or the joint study on sustainable railway corridors. However, in order to foster the relations between the two regions in the future, attracting investment will be crucial.

Despite the strategies and activities aiming to connect the EU with Asia, the three panelists put forward obstacles to be considered when shaping the EU’s presence in Central Asia. Sinikkuka Saari mentioned that the infrastructures in the region, clientelism or organized crime, should be considered. Furthermore, Sinikukka Saari reaffirmed that despite the new EU strategy on Central Asia, the EU is not a major player in the region. Alica Kizekova stated that and should include more people-to-people connectivity. “Central Asia should not only be a bridge between Europe and Asia, but also a destination for trade and investment”, she added. Furthermore, Alica Kizekova warned that the EU should be cautious and realistic with its democratic goals in the region, and that its initiatives should be backed by Member States.