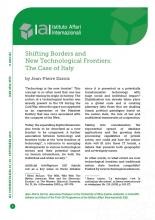 “Technology is the new frontier”. This concept is so often used that one has trouble tracing its origin in history. The notion of a technological frontier was already present in the US during the Cold War, when the space race appeared as an expression of the Manifest Destiny that was once associated with the conquest of the West.

Today, the expanding digital dimension also tends to be described as a new frontier to be conquered. A further association between technology and frontiers looks at the “new frontiers of technology”, a reference to emerging developments in various technological sectors and their potential impact on human interactions, for both the individual and wider society.

Artificial intelligence (AI) stands out as a key issue in these debates since it is presented as a potentially transformative technology with huge social and individual impact. Digitalization has already taken place on a global scale and is creating planetary data flows that are shaking classic political paradigms based on the nation state, the rule of law and multilateral frameworks of cooperation. (…)