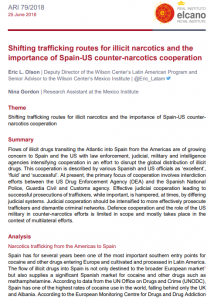 Counter-narcotics cooperation between Spain and the US is of growing importance to both countries but remains limited in scope.

Flows of illicit drugs transiting the Atlantic into Spain from the Americas are of growing concern to Spain and the US with law enforcement, judicial, military and intelligence agencies intensifying cooperation in an effort to disrupt the global distribution of illicit drugs. This cooperation is described by various Spanish and US officials as ‘excellent’, ‘fluid’ and ‘successful’.

At present, the primary focus of cooperation involves interdiction efforts between the US Drug Enforcement Agency (DEA) and the Spanish National Police, Guardia Civil and Customs agency. Effective judicial cooperation leading to successful prosecutions of traffickers, while important, is hampered, at times, by differing judicial systems. Judicial cooperation should be intensified to more effectively prosecute traffickers and dismantle criminal networks. Defence cooperation and the role of the US military in counter-narcotics efforts is limited in scope and mostly takes place in the context of multilateral efforts.