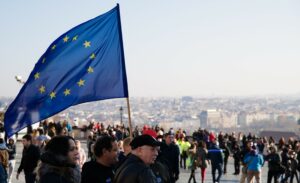 Over the past months, the European Union has developed a novel way of consulting the citizens. Eight hundred of them, drawn by lots, gathered in a series of meetings to discuss European issues. A few weeks ago, they agreed on 49 policy recommendations and 320 measures they would like the Institutions to adopt. The latter are presently examining the proposals made and will have to decide on the follow up. As we do not live in a system of direct democracy, there cannot be a simple one-to-one transposition of the outcome of a panel of citizens, however representative it may be. The democratically elected representatives in the Council and the European Parliament have the ultimate word.

The CoFoE has proven a worthwhile exercise in democratic debate. The first lesson to draw from it is that there is a demand for a more active involvement of citizens. It would make sense to build on this experience and to further use and develop the model of the CoFoE. There could be more regular contacts between the selected citizens and the experts and a sustained dialogue on policy choices, considering the constraints that exist and the need to prioritize certain measures considering the available finances. This is not about adding up conflicting requests and wish-lists. The CoFoE has been encouraging in this sense and has avoided this outcome.

The second lesson is that citizens are primarily interested in debating about policies and concrete measures. Despite much talk of Treaty change, 95% of the proposals do not require institutional or Treaty changes. This should be respected in the follow up. The EU has undergone over the past years a string of major crises to which it had to react. A number of questions arise in this context. What have the crises taught us in terms of our resilience and capacity to act? How can we make those gains sustainable, and permanent? What other gaps need filling? How can we enhance resilience to withstand black swans? The EU has managed the crises quite efficiently but with a lot of improvisation and dithering. We need a more coherent and structured approach. If you look at the themes, put upfront by the citizens, they address the burning issues of the day like climate change and our energy future, the European response to digital challenges, the need for a more social Europe, or a bigger role for the EU in security and defence.

It is worth discussing in more detail the calls for Treaty change because of the CoFoE, particularly on the part of the EP.

At the time of the adoption of the Council mandate for the CoFoE, a strong majority of the Member States were adamant that the conference should not be about Treaty change nor develop into a kind of pre-convention. It explicitly stated that the exercise was not linked to article 48 of the TEU (Treaty change). The joint mandate for the CoFoE agreed upon by the Council, the EP and the Commission did not contradict this viewpoint.

There were good reasons for adopting this cautious stance.

Proponents of further significant Treaty changes advance two major arguments. The first one is about efficiency, the second about democratic legitimacy. Both are respectable, but less convincing than they sound.

Concerning efficiency, the talk is primarily about the further extension of QMV in the Council. The fact is, however, that most legislative decisions are already subject to QMV. The remaining are particularly sensitive issues, where agreement will be difficult. The area where the call for QMV is loudest is foreign policy, largely because of the Russian war against Ukraine. The fact though is that the CFSP remains intergovernmental, where unanimity is the normal decision mode. However, the Treaty already allows the European Council to adopt a decision authorizing the Council to act by QMV in Title V of the Treaty (on foreign policy). But it is unlikely that this will happen for major foreign policy decisions. The Treaty also allows for constructive abstention in the field of foreign policy; but in that case, the dissenting MS is not bound by the decision taken. Do we want a CFSP with an increasing number of areas where not all the twenty-seven are on board? Or is the idea to have QMV decisions binding for all? This is unrealistic. Sometimes short-term efficiency concerns must be balanced against considerations of unity and sustainability! In the present situation, countries who want the strongest possible sanctions against Russia are frustrated by the need for unanimity. But there can be cases where they could be outvoted on what they consider vital interests in the relations with Russia. We have had situations in the past where Greece and Cyprus have blocked decisions on Turkey. Are we sure that we would solve the problem by simply outvoting them?

As to legitimacy, some of the proposals put forward are about further aligning the EU to a federal model. This is true of the Spitzenkandidaten model. If pushed to its logical consequence, it would create an automaticity between the EP elections and the designation of the Commission President. This would be a major departure from the present system of dual legitimacy (characteristic of a union of states and peoples), where the candidate for President needs to be endorsed by the European Council and then elected by the EP. Conferring the right of legislative initiative on the EP would weaken the role of the Commission and undermine the balance between the two branches of the co-decision authority. Other reforms, like the wide-spread use of referenda and formal citizens’ initiatives, would have to be carefully calibrated to avoid calling into question the principle of representative democracy. At his stage of the EU’s development, the perspective of achieving consent on them is minimal, as already documented by the recent letter of 13 Member States rejecting the idea of a major debate about Treaty change now.

This does not mean ruling out limited and targeted Treaty changes, if justified in the light of experience and a clear assessment of their added value for the EU’s capacity to act. This has happened in the sub-prime crisis for article 136 TEU for instance. Article 49 TEU foresees a simplified revision procedure for such cases.

To conclude: the EU has come a long way since 1985. Treaty change has been part of the road. But it is doubtful whether the time has come to embark on another bout of major Treaty changes and introspection. The EU has managed things quite well within the existing system. It would be wrong to jeopardize this “élan” by raising false expectations that risk ending in mutual recrimination. Targeted changes are possible if they have an added value. The CoFoE experiment is promising in terms of process. The EU should further develop the association of citizens in the debate on major policy challenges. The process should allow to look at choices and means and longer-term effects.