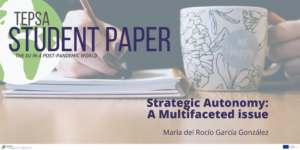 María del Rocío García González is a Bachelor student and winner of the TEPSA Student Contest 2022. We felt María’s paper was well researched, well thought-out, and well argued. Her perspective on Strategic Autonomy is novel and wide-ranging, and forms the basis of a detailed insight and analysis of its role and possible avenues for development in an intergovernmental European Union. Her paper culminates in four solid and detailed concrete recommendations.

The concept of Strategic Autonomy; understood as the capacity of the Union to define and pursue its interest within the geopolitical sphere, has been at the center of debate during the von der Leyen Commission. The new post-COVID-19 reality and the military invasion of Ukraine have brought this issue once again to the forefront of discussion within the Union. This paper attempts to analyze the new international setting and suggest potential policies to position the EU as a powerful international actor by supporting Member States, augmenting the contribution to the shared frame of security structures, reinforcing current trade partnerships, and diversifying towards new ones, improving the methods and mechanisms to detect and address risks. 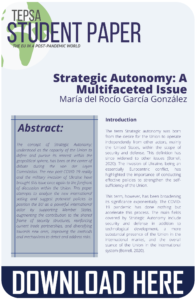 The term Strategic autonomy was born from the desire for the Union to operate independently from other actors, mainly the United States, within the scope of security and defense. This definition has since widened to other issues (Borrell, 2020). The invasion of Ukraine, being an essentially Eurocentric conflict, has highlighted the importance of conducting effective policies to strengthen the self-sufficiency of the Union.

This term, however, has been broadening its significance exponentially. The COVID-19 pandemic has done nothing but accelerate this process. The main fields covered by Strategic Autonomy include security and defense in addition to technological development, a more substantial presence of the Union in the international market, and the overall stance of the Union in the International system (Borrell, 2020).

A common misconception is that by favoring the autonomous capacity of the European Union, we are linking the growing interdependence in the international system with unbalance instead of cooperation (Young, 2021). By no means should the Union devolve into protectionist measures, but rather it should aim to adapt to the globalized world by increasing what it offers to it in terms of security, trade, and services. For this reason, in recent times, the Union has favored the expression Open Strategic Autonomy to show that the Union is not shielding itself but becoming more capable of self-subtenancy in key areas (Young, 2021).

The main threats the Union faces in a transitioning international order should be analyzed carefully. On one hand, the dangers the Russian Federation poses, as demonstrated by the current crisis and its repeated disregard for the territorial integrity and sovereignty of its neighbors; have had an immediate impact on the Union and its Member States. On the other hand, we should consider that the international system seems to be leaning to the east with an authoritarian China as its leader, indicating the end of the western liberal order in favor of an unstable multilateral order. These broad challenges bring into question the effectiveness of democracy, and the European Union as a whole, in opposition to the economically and militarily potent regimes rising in the east (Schwarzer, 2022, 187-193).

In addition to these the European Union has encountered a wide range of persistent security threats such as irregular migration, climate change, the current energy crisis or organized terrorism. Even though these challenges are transnational, which makes them difficult to address, and currently there are not in a critical stage they should be tackled in a timely manner before they escalate (Portela, n.d.).

In terms of policies affecting directly the security and defense area of action, Treaty of Lisbon does allow the Union to gradually implement a common defense policy (Schwarzer, 2022, 187-193). Nevertheless, the Union’s security and defense mechanisms are strongly interwoven with the North Atlantic Treaty Organization. The standing of Russia as a regional menace for the Member States has reignited the debate of the capability of the Union to defend itself despite its compromise with the United State in the common security frame of NATO.

As of recently the Common Security and Defense Policy (CSDP) has focused on the development of the Security Compass. This policy emphasizes the need for the Union to operate on the basis of four pillars: rapid action, ensuring the security of the population in an ever-changing international climate, investing in defense and security technologies and partnering with others towards common goals. This new policy is a hopeful development in the harmonization of the strategic objective of member states. The decalogue of measures proposed does underline the importance of coordination between Member States, current partnership as well as the development of further alliances with other international organizations such as ASEAN, OSCE and the African Union (The Diplomatic Service of the European Union, n.d.).

The security industry withing the European Union is beginning to concentrate most of its efforts in the cyberspace. The matters to be addressed in this area of defense are extremely ample. The Cybersphere has also seen an increase in its importance after the hasty need for digitalization brought by the COVID-19 pandemic. In light of this the European Union attempts to cover a large scope of issues, from promoting Cyber diplomacy and Cyber defense to favoring structures to this end such as European Union Agency for Cybersecurity (ENISA) or Information Sharing and Analysis Centers (ISACs) (European Commission, n.d.).

We should also highlight that despite the tendency of slowly increasing the defense budget in the past few years the materialization of a regional threat with the Russian invasion of Ukraine has influenced the Member States to radically increase their budget in just a month after the conflict came into full force. While the most discussed increase has been the German increase of its defense budget above 2% of its GPD Belgium, Romania, Italy, Poland have followed suit by increasing its budgets to at least 0.5% more (Mackenzie & Egozi, 2022).

As far as indirect ways of consolidation of the Strategic Autonomy of the EU one of the most relevant is the reinforcement of trade by supporting new age commerce by modernizing the e-commerce regulations, and the on-going negotiations for bilateral and regional accords among which the Comprehensive Agreement on Investment accorded with China, is one of the most beneficial for the Union in terms of diversifying its markets. At the time of this report, the text is in its final stages of development (European Commission, n.d.).

The Union is also attempting to rekindle its trading relationship with the United States considering the change of the administration. Sabine Weyand, Director General for Trade of European Commission spoke on the necessity to maintain this transatlantic relationship as it one of the key trade routes in the world. Moreover, she introduced the idea of reforming the World Trade Organization as to adapt its structure to the new economic reality and to accommodate the new great powers that have arisen since, especially China (Weyand, 2020).

As evidenced the European Union is concentrating its efforts in its collective projection as an institution. Nevertheless, we should bear in mind that the Member States are in possession of many of the competences needed to reinforce the concept of Strategic Autonomy, and therefore this issue should be approached gradually.

The beginning stages of this long-long term objective should concentrate on encouraging the individual strengths of Member States as to integrate these strengths to the overall scheme of Strategic Autonomy, therefore guaranteeing no Member State is left behind in the construction of a more assertive Union.

These measures could range from supporting research and development projects in term of security to negotiating more competitive terms for key exports of the Union such as machinery and equipment which represented a 12.9% of total exports of the European Union according to Eurostat (Eurostat, n.d.).

The participation in NATO and the development of the European Union common defense policies are not as excluding as they may appear. The strengthening of the Union’s defense mechanisms, Europe would be both, developing its sovereignty and becoming a more valuable member of the alliance. As well as that we have to consider that the European Union has interest of its own, by proving to be a more valuable member the Union is in a better position to defend these concerns in the organization.

In the past few years Member States of the Union have been losing their importance as key players in the accord, a more capable European security system would be an answer to this pledge.

The development of a capable military industry in the new market of hybrid and cyber menaces would be incredibly valuable in the frame of global security. By mobilizing the facilities and competences the Union already has and developing the ones the increasingly unstable climate the European Union would be honoring not only the compromise made with NATO but also their alliance in the defense mechanisms of the UN.

The Strategic Autonomy, as previously stated, is also impacted by the economical status of the Union. A strong euro is consequently an autonomous Europe. Its importance has augmented to the point that nowadays, it is perceived by many as a hard power device.

In an increasingly globalized and interdependent world, the European Union should consider its main markets and trade routes. Not only taking into account the traditional transatlantic routes but also bearing in mind that the economic rise of Asia accounts for a proactive policy with the objective to diversify the economic alliances of the Union while prioritizing partnerships with likeminded states.

A key element for organizing a more defined security plan in the frame of Strategic Autonomy is the detection of potential threats for the European security. This should be addressed by carefully studying the current trends in the international system and acting accordingly.

Although the Security Compass has already made advances in this field such as accelerating the process for deployment of deploying troops known as the EU Rapid Deployment Capacity, this is mainly aimed to military risks (The Diplomatic Service of the European Union, n.d.). Other issues for European Security such as unregulated migration should be rather connected with implementing systems to strengthen the defensive measures within the Union rather than enhancing its offensive capacities.

Mackenzie, C., & Egozi, A. (2022, March 22). Seven European nations have increased defense budgets in one month. Who will be next? Breaking Defense. https://breakingdefense.com/2022/03/seven-european-nations-have-increased-defense-budgets-in-one-month-who-will-be-next

The Diplomatic Service of the European Union. (n.d.). Questions and answers: a background for the Strategic Compass | EEAS Website. EEAS. Retrieved April 15, 2022, from https://www.eeas.europa.eu/eeas/questions-and-answers-background-strategic-compass_en