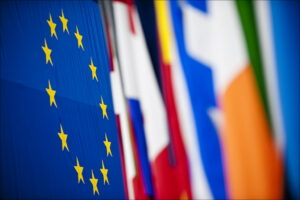 Every month, TEPSA Secretary-General Jim Cloos writes a newsletter editorial on the news of the day, the future of Europe, and the work of the TEPSA network. To read every upcoming editorial early, SUBSCRIBE to the TEPSA Newsletter here.

A  new concept has entered the EU vocabulary, strategic autonomy. It arose in the context of the many crises that befell the Union over the last decade, not least the COVID-19 pandemic. As often happens with new terms, there is no clear definition of what it actually means, and its use is by no means consensual. In fact, several Member States feel ill at ease because they read things into it that worry them. Some see it as a way of undermining NATO. Others worry that it is a vehicle for protectionism and a return to autarky. This would indeed be a problem. There can be no doubt that for the foreseeable future NATO will provide the hard security for Europe. And for the European Union, as the biggest trading power in the world, to plead for protectionism and autarky would be sheer folly.

But if it is none of those things, what is it? Just an empty slogan? Surely not.  At the root of it is a feeling that to survive in an increasingly complicated and threatening world, the Union must have the capacity to act and set its priorities, make sovereign decisions and defend its interests and values. Seen from this angle, it is an idea that makes a lot of sense and corresponds to the evolving language used by the European Council at least since 2016, as witnessed for instance by the Strategic Agenda adopted in June 2019.

The successive crises over the past 12 years have revealed vulnerabilities and weaknesses that, if unattended, could have led to the break-up of the EU. The crises have in fact obliged the EU to become more autonomous and more assertive, and to be less dependent on outside actors. One may say that the EU has practised strategic autonomy a bit like Molière’s Mister Jourdain practised prose, without knowing what he was doing. 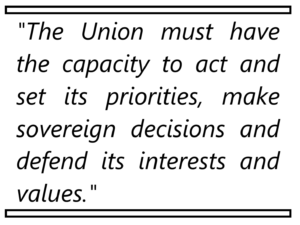 Economic and Monetary Union and a much stronger role for the European Central Bank. The migration crisis led to better control of the external borders, the strengthening of FRONTEX and the Asylum Agency, and a far more effective cooperation with countries of origin and transit. BREXIT pulled the EU27 together in quite an impressive show of unity and determination. The withdrawal of the Trump administration from the Iran nuclear deal and the Paris agreement on climate was strongly resisted by the Europeans who stuck to their guns in both instances and did not follow Washington. As a result of the COVID-19 pandemic, the EU increased cooperation across the board, developed a joint approach concerning vaccines, and adopted a massive and innovative socioeconomic package.

The use of the term strategic autonomy is in fact a way to conceptualise what was happening, but also to go further in drawing all the lessons from the past years. The best way to allay fears about a possible misuse of the term is to focus on its practical sides and to use it as a tool to have a more systematic and informed look at what the EU must do in concrete terms to further enhance its resilience and its capacity to be a global player.

This requires determined action by the State and public authorities. In the EU context, that means a key role for the European Council, but also a new reflection on governance and the wielding of executive power. The intense research work presently being carried out within the TEPSA network on differentiation could bring valuable insights in this respect. How can we best and in the most flexible way mobilise both the EU’s resources and the resources available at the level of the Member States and their regions? The quest for strategic autonomy would also benefit from more systematic foresight efforts. This is not about predicting what by nature is unpredictable (black swans do happen) but about looking at emerging tendencies and potential game-changers, increasing resilience and the capacity to withstand shocks and volatility, and even to benefit from them.

To increase resilience we need to exploit our strengths and remedy our weaknesses. The EU has been for years a leading promoter of the fight against climate change. This gives us prestige and influence, as well as a first-mover advantage. Implementation and delivering our own targets are key if we want to preserve that advantage. We are the biggest trade power. We have a huge internal market and a sophisticated regulatory framework, accounting for the “Brussels effect” described by Anu Bradford. However, our internal market has considerable gaps, particularly in the services field.    In terms of industrial policy, more should be done. Europeans were shocked to discover that we almost completely depend on China and India for even basic medicines. We need a fresh look at key value chains and our real dependences; this also applies to rare earth materials and microchips. In the digital field we are forerunners in regulation, but we are lagging behind in terms of exploiting our own data and we are completely outplayed by the GAFAs (Google, Apple, Facebook, Amazon) and the emerging Chinese giants in IT, with negative effects on our technological sovereignty. We have a strong and respected currency, but we have not really progressed as much as we should have on the external representation and role of the Euro. A lot also remains to be done  in terms of security and defence, be it in capability building or the definition of a coherent doctrine. . There is a need to clarify  relations with NATO and to ensure a more direct, equal and comprehensive dialogue on security with the U.S.

These are but a few of the many questions that arise in the new context. We should  look at all our major policies, assess our strengths and weaknesses and act accordingly. I believe that research done within the TEPSA network can and should contribute to this collective effort.