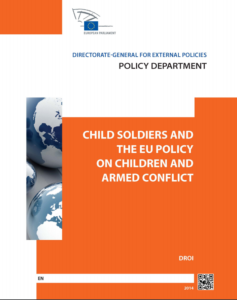 Since 2000, the association of children with armed forces and armed groups has been reported in most armed conflicts and in almost every region of the world. Tens of thousands of children under the age of 18 continue to serve in armed forces or armed groups. Hundreds of thousands are in one way or another affected by armed conflict. This report takes stock of the state-of-the-art in academia, policy and practice. It assesses the current level of implementation of the commitments made in the EU Guidelines on Children Affected by Armed Conflicts adopted in 2003 (as revised in 2007) generally, and by way of a country study of the Democratic Republic of Congo. Particular attention is paid to the EU’s complex aid architecture (consisting of a mix of thematic and geographic instruments) and how the complementarity of these instruments can be maximised. The report concludes with an extensive list of recommendations and policy options for the European Union, clustered around issues of complexity, comprehensiveness and coherence.