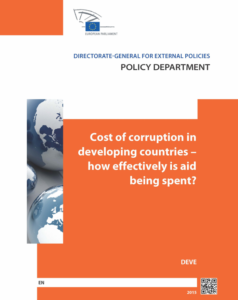 Corruption undermines development and reduces the effectiveness of development aid. Illicit financial flows are a consequence of flourishing corrupt practices, often amongst the rich in society. Such flows, estimated at USD1 trillion a year, drain the resources that should be invested in improving developing countries, thus hurting poor people disproportionately. The EU has invested much in curbing corruption in member-, candidate, accession- and to some extent neighbouring countries, but has so far had a strategic vacuum and minimal operational investments in anti-corruption initiatives in developing countries in general. Emphasis has been on safeguarding own funds, but as the EU often delegates implementation to other actors this is an inefficient and incomplete approach. The EU needs to strengthen national anti-corruption systems in developing countries, and those of its implementing partners. This will require a renewed strategy process with a focus on the special characteristics of developing countries, as well as internal change management efforts to ensure that EU policies are aligned and that EU institutions are adequately resourced to implement their tasks.