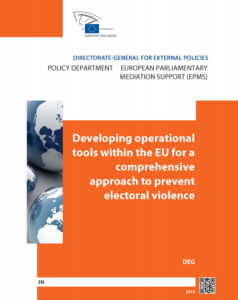 This paper discusses how EU institutions can better prevent electoral violence through a more coherent approach. Brief background on the root causes and triggers of electoral violence is provided and the role of early warning and conflict analysis in planning a strategic response is considered. The paper addresses the role of EU Election Observation Missions (EOMs) in conflict situations and the need to develop other tools for expressing political support for elections in conflict-affected states, where conditions for effective observation are lacking. The paper also considers the broad range of possible responses (political and technical) that EU institutions can implement to address both long-term structural causes of electoral violence as well as short-term triggers during the election period. The paper makes a number of recommendations including: (i) a more coherent approach across EU institutions to electoral violence; (ii) much earlier attention to elections that are at risk of violence; (iii) a wider range of tools to avoid over-reliance on EU EOMs; (iv) support for a broad range of stakeholders to address both root causes and triggers of electoral violence; and (v) strengthened capacity of EU Delegations to assess the risk of electoral violence and coordinate actions to prevent and mitigate it.

The full study is accessible here.