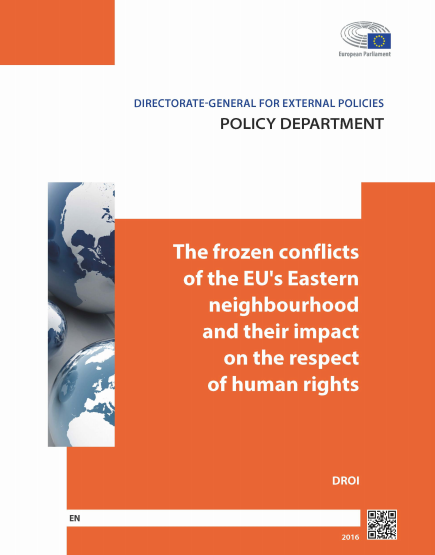 TEPSA has recently coordinated a study for the European Parliament’s Subcommittee on Human Rights (DROI), authored by András Rácz, senior research fellow at the Finnish Institute of International Affairs (FIIA).

The study deals with “The frozen conflicts of the EU Eastern Neighbourhood and their impact on the respect of human rights”. The frozen conflicts analysed are those of Crimea, Transnistria, Abkhazia, South Ossetia and Nagorno-Karabakh. In this study, the author provides a detailed overview of the actual human rights situation in the region. In particular, the focus of the analysis is on the access to the justice system, as well as on the abilities of the de jure or de facto authorities to administer justice. Particular attention is paid to Crimea because the rapidly worsening human rights situation there affects far more people than the population of the other four frozen conflicts combined. International community actions, as well as the role of civil society in protecting human rights are also analysed in detail.

The author argues that, regarding the four pre-2014 frozen conflicts, due to the uncertain legal status of these territories, the international community (including the European Union) has very limited options for getting directly engaged in defending human rights. However, the international community could do much more to hold Moscow accountable for the human rights situation in Crimea, as well as in other parts of the Russian Federation.

The European Parliament has for András Rácz a key responsibility in sustaining public attention and awareness towards the human rights situation in the regions, including both the pre-existing conflicts as well as Crimea.