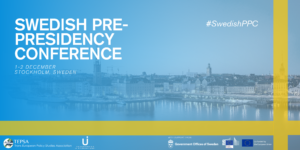 On 1 January 2023, Czechia will hand over the Presidency of the Council of the European Union to Sweden, which holds its reigns once again, for the third time following previous tenures in 2001 and 2009. During the first half of 2023, the Swedish Presidency has to sail through troubled waters to address some of the most pressing EU issues.

The Presidency will be tasked with bringing the European Union out of a difficult winter of soaring energy prices and rising inflation, precipitated by the EU’s response to Russia’s war of aggression in Ukraine. Major obstacles, including how the EU should continue to support Ukraine’s fight for a European future, how it should alleviate the cost-of-living crisis hitting European citizens, and more, remain at the top of the agenda, exacerbated by Russia’s war. Amongst these issues, ongoing challenges remain: the climate crisis and impact of Russia’s war on the energy transition, the future of Europe in the context of rebuilding Ukraine after the war, and the ongoing impact of post-truth politics on democratic processes.

To scrutinise the priorities and challenges of the Presidency, TEPSA and its Swedish Member Institute, the Swedish Institute of International Affairs, hosted the Swedish Pre-Presidency Conference on 1 and 2 December 2022 in Stockholm and livestreamed online.

The conference brought together academics, policy-makers, media and civil society in order to discuss the agenda and challenges of the upcoming Presidency. More specifically, the conference addressed the impact of the Russian-Ukrainian war on the future of European security, but it also explored a number of other key issues, such as the energy transition in the context of soaring energy prices linked to the war, the future of the EU’s fundamental values in a context of post-truth politics, as well as the need for a humanitarian approach to migration and asylum policy.