On 7-8 June 2018, TEPSA and its Austrian member, the Institute for Advanced Studies (IHS), organised TEPSA’s traditional Pre-Presidency Conference (PPC) in Vienna, Austria, ahead of the 2018 Austrian Presidency of the EU Council. The Austrian Society for European Politics, TEPSA’s associate member, also contributed to the event.

The full conference report can be downloaded here.

A short video about the PPC Vienna can be found here.

This Pre-Presidency Conference brought together around 90 academics and researchers from the broad TEPSA network, policy-makers, media and civil society in order to discuss the agenda and challenges of the upcoming Council Presidency. Besides many lively discussions, the conference also provided ample networking opportunities for researchers from both EU and non-EU countries. 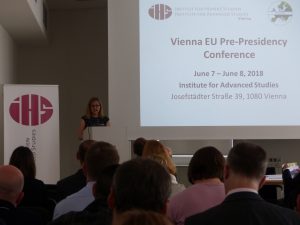 The conference was opened by Dr Franz Fischler (President of the Board of Trustees of the IHS), Prof. Jaap de Zwaan (TEPSA Secretary General, and Dr Katrin Auel (Head of Research Group European Governance and Public finance at the IHS). Paul Schmidt (Director of the Austrian Society for European politics) later presented the upcoming TEPSA-edited book “The Future of Europe – Views from the Capitals” and its Austrian chapter. 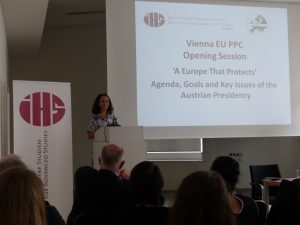 Alexander Schallenberg, Director General at the Austrian Federal Government shared Austria’s priorities during its upcoming EU Council Presidency and the meaning of its motto “A Europe that protects”. It is a tradition that the TEPSA network formulates recommendations to every incoming EU Council Presidency. This time Dr Funda Tekin (TEPSA Board member) presented the TEPSA recommendations, that focused on the topics of security, migration, the next Multiannual Financial Framework and the Brexit negotiations and handed them over to the representative of the Austrian government.

The first day of the conference concluded with three parallel sessions, discussing security and border control, the European Energy Union and Digital Europe and Communication respectively. 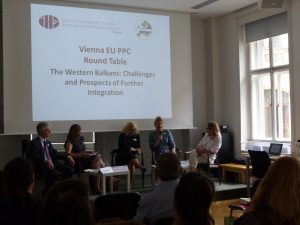 Due to the South East Europe focus of the conference, the second day started with a panel discussion on the Western Balkans .The panelists Prof Danijela Jacimovic (University of Montenegro), Lejla Ramic-Mesihovic (Foreign Policy Initiative Bosnia-Herzegovina), Dr Irena Rajchinovska Pandeva (Ss. Cyril and Methodius University Skopje) and Dr Klaus Woelfer (Austrian Federal Ministry for Europe, Integration and Foreign Affairs) discussed the challenges and prospects of further integration of the region as well as the challenges of the Danube region. 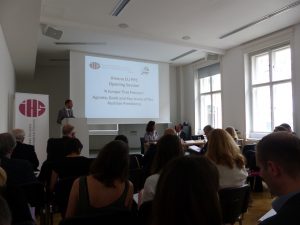 After the panel discussion, the conference participants split up in three parallel sessions to discuss the development of the European Monetary Union, the Multiannual Financial Framework and Migration Policy respectively. Prof Michael Kaeding (Chairman of the TEPSA Board) concluded the Pre-Presidency Conference by thanking all participants for the active contributions, the organisers and all supporters, namely the Central European Initiative, Wissenschaft-Forschung Niederoesterreich, the Austrian Society for European Politics, Oesterreichische Nationalbank, the Ministry for Europe, Integration and Foreign Affairs, the European Commission’s Erasmus+ Programme and Europe for Citizens Programme and the Federal Trust for education and research.