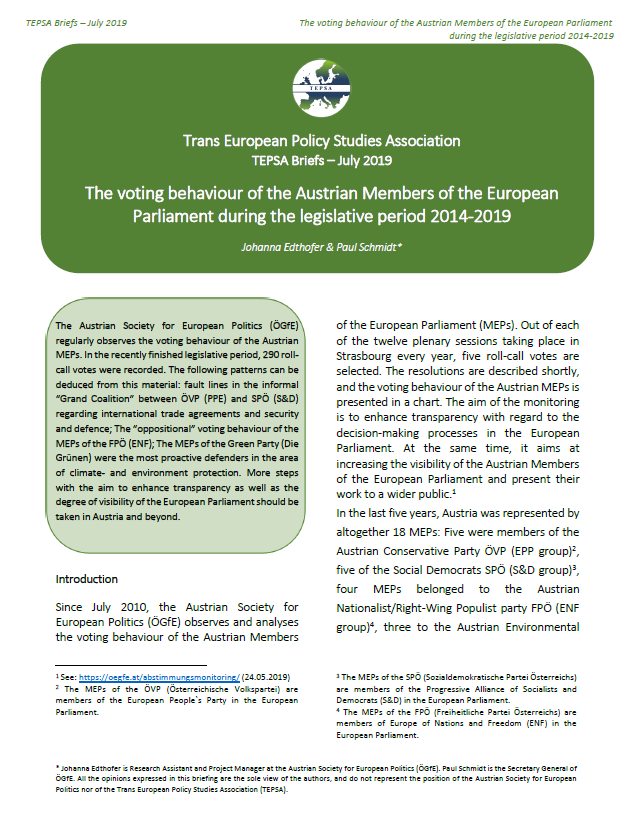 TEPSA is happy to present its new policy brief “The voting behaviour of the Austrian Members of the European Parliament during the legislative period 2014-2019” written by Johanna Edthofer & Paul Schmidt, respectively Research Assistant/Project Manager and Secretary General at the Austrian Society for European Politics (ÖGfE).

The Austrian Society for European Politics (ÖGfE) regularly observes the voting behaviour of the Austrian MEPs. In the recently finished legislative period, 290 roll-call votes were recorded. The following patterns can be deduced from this material: fault lines in the informal “Grand Coalition” between ÖVP (PPE) and SPÖ (S&D) regarding international trade agreements and security and defence; The “oppositional” voting behaviour of the MEPs of the FPÖ (ENF); The MEPs of the Green Party (Die Grünen) were the most proactive defenders in the area of climate- and environment protection. More steps with the aim to enhance transparency as well as the degree of visibility of the European Parliament should be taken in Austria and beyond.