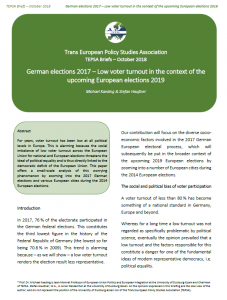 TEPSA is happy to present its new policy brief “German elections 2017 – Low voter turnout in the context of the upcoming European elections 2019”, written by Michael Kaeding (Jean-Monnet Professor of European Union Politics and European Integration at the University of Duisburg-Essen and Chairman of TEPSA) & Stefan Haußner (Junior Researcher at the University of Duisburg-Essen).

For years, voter turnout has been low at all political levels in Europe. This is alarming because the social imbalance of low voter turnout across the European Union for national and European elections threatens the ideal of political equality and is thus directly linked to the democratic deficit of the European Union. This paper offers a small-scale analysis of this worrying phenomenon by zooming into the 2017 German elections and various European cities during the 2014 European elections.