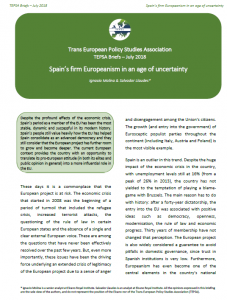 TEPSA is happy to present a new policy brief on “Spain’s firm Europeanism in an age of uncertainty“ written by Ignacio Molina and Salvador Llaudes from the Elcano Royal Institute in Madrid.

“Despite the profound effects of the economic crisis, Spain’s period as a member of the EU has been the most stable, dynamic and successful in its modern history. Spain’s people still value heavily how the EU has helped Spain consolidate as an advanced democracy and they still consider that the European project has further room to grow and become deeper. The current European context provides the country with an opportunity to translate its pro-European attitude (in both its elites and public opinion in general) into a more influential role in the EU.”