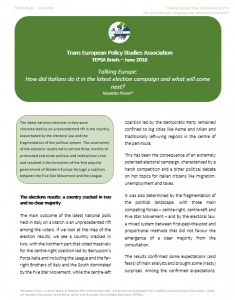 TEPSA is happy two present a new policy brief on “Talking Europe: How did Italians do it in the latest election campaign and what will come next?“ written by Nicoletta Pirozzi (Head of “EU, politics and institutions” programme and Institutional Relations Manager at Istituto Affari Internazionali in Rome).

“The latest national elections in Italy were characterised by an unprecedented rift in the country, exacerbated by the electoral law and the fragmentation of the political system. The uncertainty of the electoral results led to almost three months of protracted and acute political and institutional crisis and resulted in the formation of the first populist government of Western Europe through a coalition between the Five Star Movement and the League.”