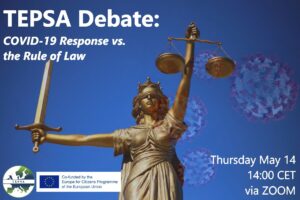 On Thursday 14 May, TEPSA  hosted the latest TEPSA Debate on 14:00 CET via Zoom. The event brought together experts from the TEPSA Network to discuss the theme “COVID-19 response vs. Rule of law’’.

In several European countries, emergency measures taken in response to the COVID-19 pandemic have triggered questions whether the strengthening of executive powers is proportionate and whether governments do not evade accountability. In Hungary, the government has obtained the power to rule by decree for an indefinite period and a broadly-defined criminal offence has been introduced for spreading “distorted” information in relation to public health measures. In Poland, the government refrained from declaring a state of emergency that would necessitate the postponement of May’s presidential elections; instead it tried to change the electoral law in order to distribute all ballots by post. Also in Turkey, the government has opted not to invoke a state of emergency that the Constitution provides for; instead it has relied on circulars and other low-ranking legal measures that are harder for Parliament and courts to review. The UK government has also been criticized for its reluctance to work with Parliament in the discussion and adoption of measures to combat COVID-19. The large Conservative majority in the House of Commons has inhibited effective Parliamentary scrutiny.

Experts from the TEPSA network analysed these four cases in an online debate, bringing together constitutional law and political science perspectives. Will “emergency” steps inflict longer-term damage on the division of powers in the four countries? Does the EU play a relevant role in discouraging or correcting breaches to the rule of law? And can these cases still be considered isolated, or are they just the most visible instances of a broader European problem? All these questions were explored in detail by the TEPSA experts.

The discussion featured presentations by: