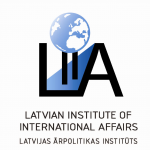 On 9 October 2013 the Latvian Institute of International Affairs and Ministry of Foreign Affairs of the Republic of Latvia, supported by the European Commission Representation in Latvia, Trans European Policy Studies Association and Riga Graduate School of Law, organised a Guest Lecture.
Presentation titled “From the Vilnius Summit to the Riga Summit: Priorities, Goals, Achievements” was given by Dr. Kristi Raik, Researcher at the Finnish Institute of International Affairs

Dr Raik focused on the EU’s power and influence in the Eastern neighbourhood. She noted that the recent Russian attack against the Eastern Partnership had made the EU look more influential than it was, but also pushed the EU to actually be more active. The overall context in Europe was difficult because of the EU’s internal crisis and the relative global decline of Europe. However, Dr Raik argued that Europe still had considerable economic power especially in the neighbourhood, where the expansion of the EU’s internal market through deep and comprehensive free trade agreements was at the core of EU policy. She highlighted that DCFTAs involved high economic costs for the partner countries and that extensive EU support was needed to ensure their implementation in countries such as Ukraine and Moldova.

Dr Raik expressed concern over the exclusive nature of the model of integration that the EU was offering to the neighbouring countries. Enlargement had moved further away from the reach of Eastern neighbours. DCFTA was comparable to the European Economic Area, the main differences being that the EEA countries were rich and stable and had themselves chosen to stay outside the EU. To conclude, Dr Raik stressed the need for the EU to focus on the implementation of DCFTAs and to think of ways to make the EU more inclusive, e.g. through better communication and visa liberalization.