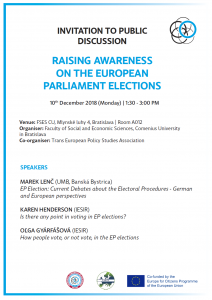 Marek Lenč highlighted the interconnection between politics and business. He shortly presented what is happening right now in Europe: new dividing lines not directly following national borders (approach to cohesion policy, migration issue, etc.), an ongoing debate in Central Europe on shared values – a shift in the debate between old and new states.

Oľga Gyarfášová argued that the European elections are not genuinely European, as usually the national agenda and interests play a key role the electoral campaign. The EU agenda was successfully used, she argued, as a tool for mass mobilization by those parties which managed to instrumentalize the EU as a guarantee of improved economic conditions or as a scapegoat for the misery.