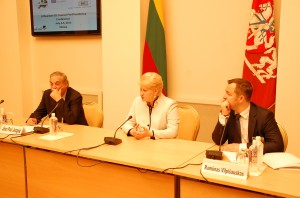 The TEPSA Lithuanian Pre-Presidency conference was held on July 4th, 2013 in Vilnius. The next day the General Assembly gathering the TEPSA Members took place.

The Conference concentrated on the main priorities of Lithuanian EU Presidency covering the EU Eastern Partnership Policy, the common energy policy, European economic governance reforms and challenges of differentiation in the EU. Participants from Lithuanian governmental institutions and TEPSA institutions from all over Europe took part. Recommendations to the Lithuanian Presidency were presented.

The event featured the interventions of Her Excellency Dalia Grybauskaitė, President of Lithuania and Linas Linkevičius, Minister for Foreign Affairs.

The Conference was organized by Trans European Policy Studies Association (TEPSA), Institute of International Relations and Political Science of Vilnius University (IIRPS VU) and European Integration Studies Center (Vilnius). It was financed by the Representation of European Commission and the Bureau of European Parliament in Lithuania.