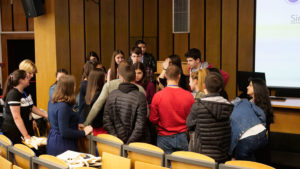 On May 14, 2019, the Department of Political Science at New Bulgarian University, TEPSA and the Information Bureau of the European Parliament (EP) for Bulgaria, organised a Simulation of an EP plenary session and debate on a proposed Resolution on the EU Enlargement to the Western Balkans in Sofia. The session was opened by the Head

92 high school students (and first time voters) and their teachers took part in the interactive role-playing game of the EP plenary session on “EU enlargement in the Western Balkans”. Students were divided into groups reflecting the proportional composition of the European Parliament. The first part of the simulation was focused on the preparation of a common position on the proposed Resolution. The Resolution was drafted prior to the event and distributed to each participant. The simulation continued with a parliamentary debate during a simulated plenary session according to a previously adopted agenda, organization rules. The materials to help participants prepare their parliamentary groups and defend their position during debates in the Plenary hall were preliminary distributed as well. Furthermore, the participants had to engage in group negotiations and coalition building. 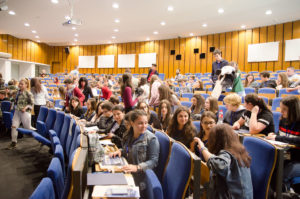 The debate, voting and adoption of position of the European Parliament (EP) concerned the enlargement of the EU to the Western Balkans. The goal of the simulation was to raise the interest of the first time voters (high school students that turned 18 this year) to the upcoming elections for the European Parliament via an educational game. The game itself was designed to enable the participants to experience the democratic process and the legislative procedures in the European Parliament. The participants increased their knowledge on the EP functions, what are the complexities of its decision-making process, the role of communication and negotiations, how important is the influence of the EP. The simulation also allowed students to exercise and further develop their skills for debate, negotiation and public expression.

The event was co-funded by the Europe for Citizens Programme of the European Union.