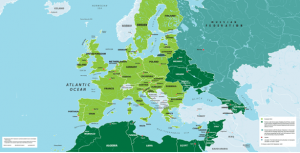 In a period of ten years the geopolitical situation at the external borders of the European Union has completely changed. Of course, the Israeli-Palestine conflict unfortunately is a lasting one, during the last decade the situation has in fact only worsened. However, apart from that central problem, a lot of unrest and conflicts have occurred in our neighbourhood. First the invasion in Iraq. Then the Arab Spring which has become an Arab Winter if not worse. The revolution resulted in an unstable Arab world, giving rise inter alia to a civil war in Syria which is now out of control. It also paved the way for a Northern Africa in transformation (Tunisia, Libya, Egypt and recently also Algeria where a French tourist was murdered by a terrorist group). Since a couple of years, we furthermore experience a massive influx of migrants and refugees coming from Northern and Central Africa, looking for a better future notably in Europe. Recently the cruelties of IS in Iraq and Syria have only added to the disasters and dramas which already took place in that region.

This year, also the border between Ukraine and the Russian Federation was unilaterally modified by Russia: an unprecedented violation of the territorial integrity of an independent state in Europe’s recent history. As a consequence, the relationship between the EU and the Russian Federation is now full of tensions, whereas the Union is faced with a weakened Ukraine at her Eastern external borders.
This being so, one has to recognize that the last ten years the EU has more or less neglected the relations with her neighbours. The enlargements of 2004, 2007 and 2013 as well as the economic crisis kept us busy. Moreover our approach with regard to the new Eastern neighbours (ENP, Eastern Partnership) is a rather artificial one. In the course of the negotiations to conclude an association agreement, the EU requires them to implement our norms, values and policies. However, the new neighbours -although clearly European states- are not allowed to become new inhabitants of our common house, if it is only in the long run. Such an approach appears to be contradictory and has to change. Peace and security on the European continent requires us to develop a new policy.

We should start to fully exercise our Soft Power capacity in our relations with all our neighbours, whether in the East or in the South. First of all humanitarian aid has to be provided where necessary. Then assistance is needed in the process of reconstruction and institution building, including the setting up of independent judiciaries. We must also support economic reforms and democratic changes. Apart from that, the development of people to people contacts and academic cooperation has to be stimulated. Student and youth exchanges as well as internship programs should be developed. Of course preliminary conditions and requirements also have to be set: notably the firm aspiration of the neighbour in question to strive at democracy, respect for human rights and the rule of law.

At a certain moment this approach has also to be applied in the contacts with the Russian Federation. Because, whether you like it or not, Russia is an important neighbour of the EU. The development of stable relations with that country can only contribute to stability on the whole European continent. In that context it can also facilitate the intensification of our contacts with former Soviet Republics: Ukraine, Moldova and Belarus, as well as in the Southern Caucasus: Armenia, Georgia and Azerbaijan. As to the energy sector, an interdependence between Russia and the EU does already exist. However, in the future Russia may also become an important market for our small-, medium-sized and big companies. Moreover well-developed people to people contacts are more than welcome. Be that as it may, first of all satisfactory solutions for the outstanding military, political and economic problems in Ukraine have to be found.

So, an innovated neighbourhood policy has to be developed in the coming period as a priority of EU policy, in the interest of peace and security on our European continent. For that purpose initiatives are to be expected in the first place from the European Commission: a new but challenging responsibility of the new commissioner for Neighbourhood Policy and Enlargement Negotiations, Johannes Hahn!