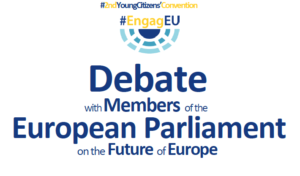 In the framework of the project #EngagEU, TEPSA organized the 2nd Young Citizens’ Convention – Debate with Members of the European Parliament on the Future of Europe, which took place in Brussels on 24 September 2019.

The event gathered Members of the European Parliaments (MEPs), several Civils Society Organizations, and over a hundred young citizens with an interest in European politics. Funda Tekin, Director of the Institut für Europäische Politik (IEP), opened the event with some insightful remarks on the 2019 European Parliament elections. Ms Tekin praised the high turnout and the high level of engagement among citizens. In that regard, she explained how the project #EngagEU aimed at making the voices of young people heard by introducing the Manifesto “Young ideas for the Future of Europe”.

Subsequently, Pedro Silva Pereira, Vice-President of the European Parliament, proceeded to deliver the keynote speech. His intervention emphasized climate change, inequalities, poverty, and migrations as the biggest challenges the European Union will need to tackle. In the face of adversities, he explained, listening to the youth is a political responsibility, especially in light of the increased level of political participation among young people. After the Vice President’s intevention, the Convention moved to the interactive debate, where the audience had the opportunity to discuss their ideas for the Future of Europe in a lively debate with the following Members of the European Parliament: 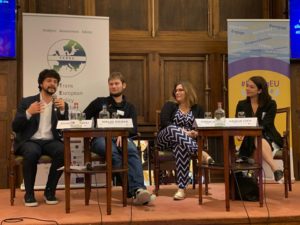 The first topic of the debate was “European Identity”. #EngagEU Rapporteur Philipp Raab first gave an overview of the proposals of the Manifesto regarding the strengthening of a common European identity. The aims of the Manifesto were to:

While Niklas Nienaß was supportive of all three suggestions, Svenja Hahn and Katalin Cseh were less enthusiastic about the mandatory nature of the last proposal, as they argued it could backfire by damaging the image of the European Union. Either way, they also agreed that the best solution would be to make the European Solidarity Corps a more attractive option to EU citizens, albeit not a mandatory one.

Regarding the environmental policy of the European Union, Rapporteur Gustav Spät highlighted three main proposals of the Manifesto:

The MEPs warmly welcomed the proposals, with Svenja Hahn even promising to share the idea of a Common European Refund System with her Committee. The panel also stressed the importance of education in the fight against climate change and suggested that the upcoming Multiannual Financial Framework could promote projects targeted at European teachers and schools. Finally, the MEPs explained the need for EU Member States to be financially incentivised to contribute more to this cause.

First, Carolina de Albuquerque clarified that the “Integration policy” of the Manifesto did not focus merely on the management of migratory movements but also on the need to help people integrate. To this end, the proposal of the Manifesto included:

These key points led to a fruitful discussion on the value of immigration to the European Union and the perception of this phenomenon among EU citizens. As far as the three proposals were concerned, the MEPs praised the inclusive nature of the Manifesto, although they were not as confident about the introduction of a “test semester” which would only apply to immigrants.

The main proposal of the Manifesto with regard to foreign policy, presented by Klajdi Kaziu, stated that  “the first step towards a safer Union must be done through the harmonization of military procurement”.

The discussion quickly evolved into a debate over the need for a united European Army. Brando Benifei argued that the role of NATO’s StratCom was limited and that the European Parliament needs to step up its efforts in the fight against fake news and disinformation. Niklas Nienaß also hypothesized that a European Army would be the next step of the harmonization of military procurement. This led him to agree that the EU should speak with one voice, but he emphasized that the Union’s foreign policy should focus on trade negotiations more so than common defence. Svenja Hahn, on the other hand, corroborated the creation of a European Army under the control of the Parliament, and  Katalin Cseh also suggested that the EU needs to defend European common values in trading negotiations by reinforcing its foreign policy with military power.

Following the debate, a Civic Engagement Hub took place, where several civil society organisations presented their work and how young Europeans can get engaged in civil society.TEPSA had the honour of welcoming the following organisations:

#EngagEU aimed to mobilise and empower young citizens to participate in European politics by developing concrete recommendations for the future of Europe. To this end, over 600 young Europeans came together from September 2018 to April 2019 to discuss and to contribute to the Manifesto “Young ideas for the Future of Europe”.