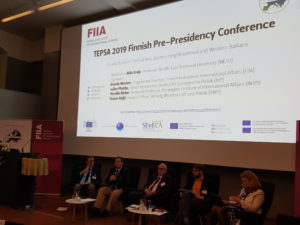 On 7 June 2019, SEnECA organised a panel on the topic “EU and Russia in Central Asia, Eastern Neighbourhood and Western Balkans” in the framework of the TEPSA Pre-Presidency Conference in Helsinki. Julian Plottka (IEP, Germany) participated as a speaker on behalf of the SEnECA consortium. The other speakers were Arkady Moshes, Programme Director at the Finnish Institute of International Affairs, Pernille Rieker, Research Professor at the Norwegian Institute of International Affairs and Dušan Reljić, Head of Office, Stiftung Wissenschaft und Politik. The debate was moderated by Atila Eralp, Professor at the Middle East Technical University. A video of the panel discussion can be watched here.

The discussants talked about the involvement of the EU and Russia in Central Asia, Eastern Neighbourhood and Western Balkans. Against the backdrop of the newly published Central Asia strategy of the EU, the speakers discussed how the involvement of the EU might change in the future. Pernille Rieker commented that the Central Asia strategy is not focused on certain priorities, but instead covers many different policy areas. This is because civil society has been consulted in the preparation for the strategy so that many of the gathered views have been incorporated in this broad framework.

Julian Plottka stated that while it is difficult for the EU to compete with Russia in Central Asia due to Russia’s cultural influence through mass media, among other means, the Central Asian states are still interested in a closer cooperation with the EU. The EU especially has a comparative advantage in the region as a balancing actor and as an actor seeking sustainable connectivity. Arkady Moshes on the other hand assumed that Russia’s influence in Central Asia will diminish in the next years while China will gain more and more importance as an economic and political actor.