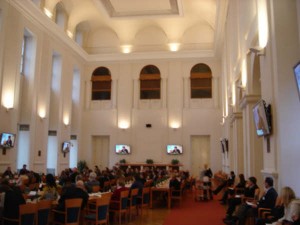 Under the title « Priorities and Prospects for the European Union » TEPSA’s Pre-Presidency Conference took place on 4/5 December 2008 in the premises of the Czech Foreign Ministry in Prague. The conference, which was organised by TEPSA’s Czech member, the Institute of International Relations (IIR), welcomed a broad audience of local politicians, representatives of local organisations and researchers from almost all EU member states and beyond.

After a welcome speech by TEPSA’s Secretary General, Graham Avery, the conference was opened by Jana Hendrichová, the Czech Deputy Vice Prime Minister for European Affairs, who addressed the Programme and Priorities of the Czech EU Presidency, followed by the presentation of the recommendations to the Czech Presidency by members of the TEPSA network by Nikos Frangakis (EKEME, Athens).

The four thematic panels of this 2 day conference, which each included expert speakers of the TEPSA network, discussed the current challenges to the European Union during the Czech Presidency: The Lisbon Treaty and its ratification process, Euroscepticism, the EU’s external relations towards the USA and Russia, and the current global economic crisis.

The conference closed with a panel emphasizing the role of the team presidencies (France, Czech Republic, Sweden) and some concluding remarks by TEPSA’s Chairperson Wolfgang Wessels on the general prospects for the EU.

The next Pre-Presidency Conference will take place most likely on 28-29 May 2009 in Stockholm and be organised by TEPSA’s Swedish member, the Swedish Institute of International Affairs (SIIA).